Grey Seals
10/11/20103
Ravenscar, Scarborough
A fantastic 3 hours or so at Ravenscar, north of Scarborough, late this morning and around lunch time, after a great breakfast at the Watermark Café on the Marine Drive Scarborough.
There was cracking visibility north towards Robin Hoods Bay, during the walk down to the sea, which had to be done fairly carefully due to the now really poor path and the same being muddy and slippery.
When we got down to sea level, all the cliff bottoms were in the shade due to the low sun height at this time of year and we were to early for the tide to be far enough out to get on to the sunny out crop of land, therefore the pictures of the Seals were shot at quite high ISO levels so not fantastically sharp.
At sea level we were greeted with great sights of Grey Seals of all ages, including some old Bull Seals among the rocks and to the shale beach to the south of the headland, though these were spooked into the sea and off shore by later walkers and sightseers.
Indeed at times you really had to be careful how you walked around, with many pup seals being stuck between various large rocks awaiting mothers or higher tides.
We (me and Adele) ventured north a little way towards Boggle Hole, but were stopped in our tracks, by not wanting to disturb a female Seal which had just given birth to her pup (though other walkers had passed her without even seeing what was going on!!). We stood back and sat behind various rocks for cover while she gradually managed to manoeuvre her pup from behind a sheltering rock, for the pups first feed, indeed during the time we watched, the pup dried out with her coat changing colour and fed a number of times, an absolutely brilliant and wonderful sight.
View north to Robin Hoods Bay 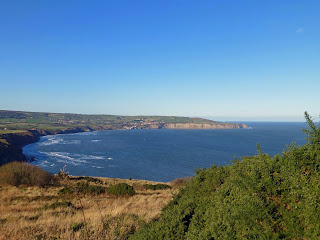 View to the rocks and rock outcrop, which was bathed in sun but not accessible while we were there 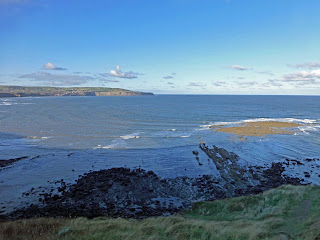 A view of various rocks, pick out the seal, note very well hidden, beware where you tread!! 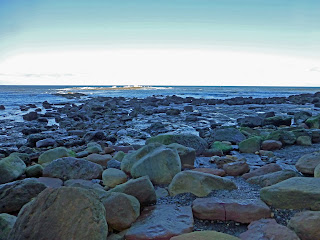 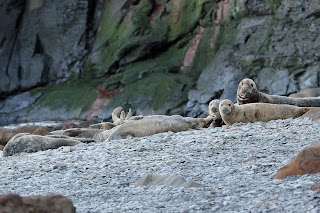 Various Seals amongst the rocks 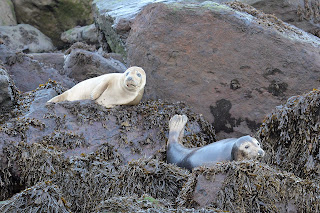 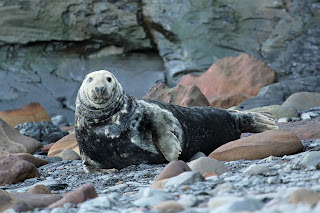 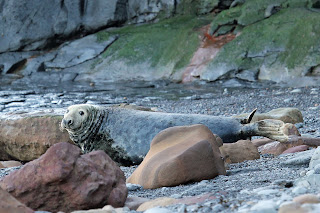 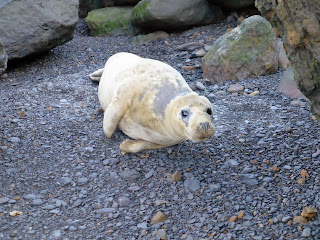 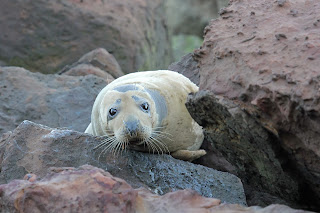 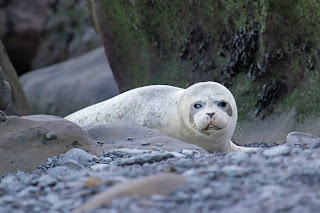 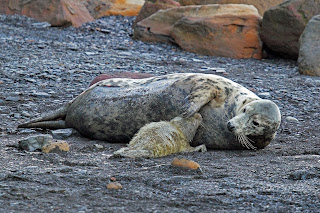 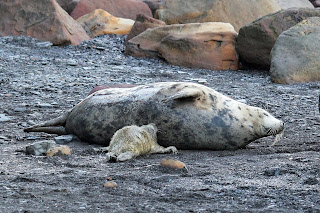 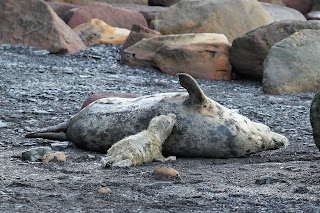 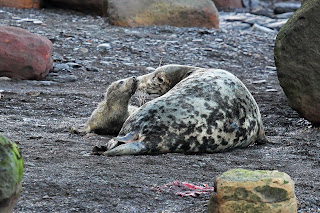